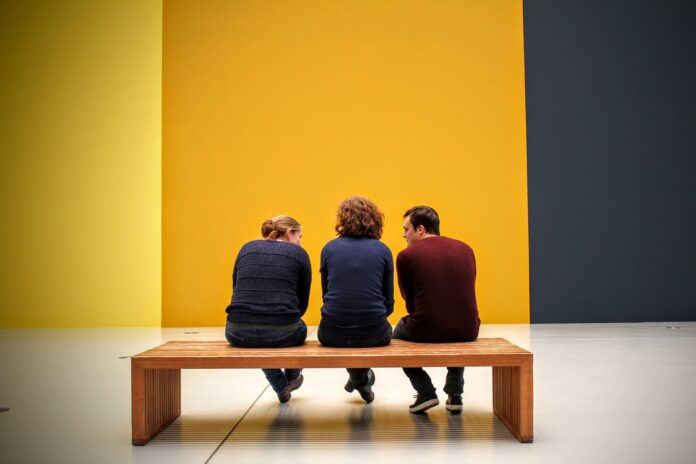 The changing of the calendar feels like a great time to be refreshed. Whether it’s cleaning out your wardrobe, cleaning your house or changing habits, new years are often a time for new beginnings. And right now, it seems like a lot of art galleries are sharing this sentiment, with several Hamilton galleries having new shows opening for the new year. Although the Art Gallery of Hamilton may be closed until February for renovations, there is no shortage of new and unique exhibits to see this January across the city- including one that we profiled last week.

Here are five more shows at local galleries that are opening this month.

The Assembly Gallery is best known as the space at the back of King Street East’s popular Red Church Cafe. The Gallery is formally organized and run by a cooperative group of almost twenty professional artists who share the goal of showcasing contemporary art in Hamilton. January’s exhibit Again and Again and Again features three of these members- Sarah Kernohan, Gareth Lichty and Mark Prier in an exhibit described through layers and series. The three artists have distinct styles- Kernohan builds collages using photographic fragments of rocks; Lichty translates large-scale installations into woodcut prints on paper and Prier transforms everyday objects into unsettling, but mundane forms. Expect to see not just traditional media on the walls of the gallery in this exhibit, but sculptural elements protruding from spaces as well.

If you spent time sharing a meal with others over the holidays, or are concerned about the rising cost of food, this is an exhibit you won’t want to miss. Recognizing the juxtaposition of food as an act of love and care, the challenges of food security for certain groups of people and those who participate in the access of food (such as farmers and delivery workers), this exhibit by the Workers Arts and Heritage Museum explores the ways that food has been brought to tables in times of plenty, as well as times of challenge. Attendees are encouraged to reflect on the exhibit and contribute a non-perishable food item at the Centre, which they will deliver to one of Hamilton’s six community fridge and pantry locations.

Feeling like a little introspection this new year? Look no further than View Life; Earls Court Gallery’s exhibit opening this month which brings together three artists to explore the changes and possibilities in life which can provide tenacious viewpoints. Artist Mimmo Baronello explores how humanity is entwined with flora and fauna, while Brenda Nieves sculpts figurative forms that slip between reality and mythical stories to offer perspectives on the perseverance and power of the human spirit. The third artist featured in View Life, Diana Rosa, explores questions of identity, love, relationship and environment through bold paintings. Can’t travel to the Ottawa Street North gallery to view the exhibit? Don’t worry- all artworks are also featured online, so the show can be viewed from the comfort of your own home as well as in person.

Need a bright pick-me-up amid the greyness of winter? Look no further than Dundas’ Winter Blooms show- a collaboration between the Carnegie Gallery, Dundas Museum and Archives and the Dundas Valley School of Art. The show takes place in two parts- beginning January 13, when each location will offer free admission to featured artworks and artifacts by more than ten artists on display (including textiles, ceramics, sculpture and glass work), all connected by a common inspiration of flowers. The second part of the show is only available to be viewed from January 26-29 at The Carnegie Gallery. The highly anticipated highlight will present original floral arrangements inspired by featured artwork and created by ten local designers. The flower arrangements and artwork will be displayed side-by-side for the public during the one weekend only.

Horror lovers know that there is not much better than abandoned locations, haunted belongings and mysteries of the unknown. The Haunted Scanner, a mysterious MRI machine by Sally McKay and Von Bark on display at McMaster Museum of Art, fits the bill perfectly. Made of chipboard, woodscraps, and electronics, the scanner can’t function as an MRI machine should, but can potentially offer glimpses into a murky inner world. The exhibit adds other odd objects along the same lines and ask attendees to question their function, meaning and whether they are relics of past technologies, powerful talismans, nostalgic souvenirs or something more. This all aligns with McKay’s greater theme where art and neuroscience are intrinsically linked through the viewer’s mind- but whether a supernatural force is at play or not will be up to those who attend the exhibit in person.