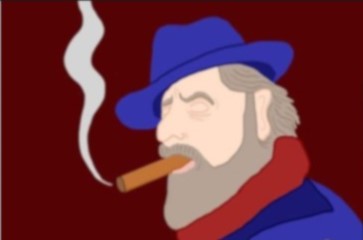 A month ago, Adrian Gorrissen had no idea that he would be in a Hamilton Fringe production this year. Known locally for his work at the Tivoli and Theatre Ancaster, Gorrissen’s summer plans were changed by a single phone call in mid-June by a former colleague. Within days, he had signed up to play John Houseman, a frequent collaborator of Orson Welles in Dramatic Hat Productions’ Mercury Man: The Last Performance of Orson Welles.

“I told him to give me the details, because I wasn’t aware that it was performing in the Hamilton Fringe. I wasn’t aware of the dates. And he just said ‘We need an actor ASAP.’ Then I received a call from (writer, director and producer) Joel three days later and he said ‘How fast can you get here? We open in a month.’” Gorrissen recalled.

Mercury Man saw great success at the Winnipeg Fringe Festival in 2018, receiving 4 out of 5 stars from the Winnipeg Free Press and 4.5 out of 5 stars from audience members. The play features Orson Welles (played by Rod McTaggert and Joel Pettigrew) meeting his “Biggest Fan” while in the process of recording his final work, which was completed five days before the actor’s death. This chance meeting in a recording studio results in the character of Welles reflecting on his early career in film, radio and theatre. The production uses projections, flashbacks and costumes/makeup to transport audience members between the different eras of Orson Welles’ storied career. Written by Joel Pettigrew, whose other Fringe successes include The Girl in the Photograph and Waking, Mercury Man tries to stay as close to reality as possible, using actual events and characters from Welles’ life to tell the story.

The play also previewed last year at the Pearl Company; however, audiences expecting the exact same performance will be in for a surprise. Mercury Man has undergone a number of revisions since the original concept, and the version being performed at the Hamilton Fringe Festival is version 40.2. The show is revised according to where it is performed, according to Gorrissen, with changes made to stage directions so that the show fits appropriately in any space that it is performed in.

“They had a backstage at the Winnipeg Fringe, whereas we’re going to be onstage at all times at Mill’s Hardware. We’ve restaged the show to accommodate our venue.” Gorrissen said. “There is very little space backstage, and we have to think smartly about the space onstage. For example, instead of two tables like last year, we just have one. Instead of putting a typewriter on a table, I now put it on my lap.”

Before accepting the role and starting the rehearsal process, Adrian Gorrissen didn’t know much about the work of Orson Welles. “I knew about Citizen Kane, obviously- his most famous movie. And I knew a little bit about him; that he was difficult to work with, but that was it. But now, after a week and one rehearsal, I know far more about him than I thought I would ever know.” Recognizing that some patrons may also be less familiar with the work of the legendary actor/director, the production starts with a news reel that summarizes Welles’ work and provides additional context. From there, the audience learns the backstories of Orson Welles (best known as a perfectionist in his craft with work such as Citizen Kane and the radio play War of the Worlds) and his frequent collaborator John Houseman (Oscar winner for Best Supporting Actor for 1973’s Paper Chase) and contrasts these legendary figures at the height of their careers with the same figures much later in life.  “I hope the audience leaves with a better understanding of Orson Welles himself. I previously knew him as this bad person that was hard to work with, but now that I’ve seen the show and seen the humanity behind the titan, I have a better sense of who he was as a person, versus who he was as per the headlines in the newspapers.”