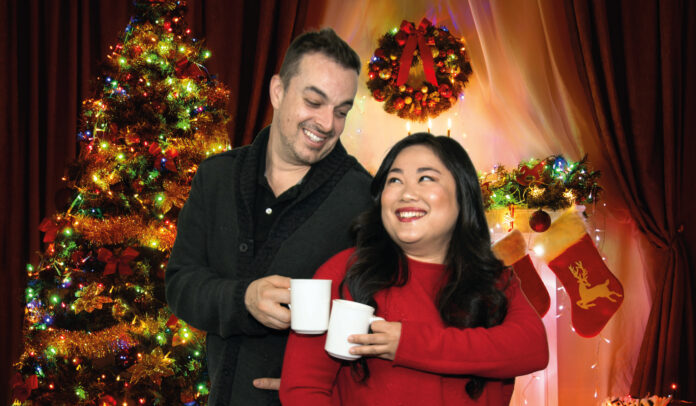 Put it all together, and you’ve got the formula for every Hallmark Christmas movie, which has lured millions of fans into cable TV viewership who both love- and love to hate- to watch the happy endings that always feature a kiss in its final scene.

In Hamilton, audiences have the chance to not only see one of these movies come to life, but also help craft it by choosing some key ingredients to the formula. A cast of six improv comedy actors will then create a Hallmark-esque Christmas movie on the spot, incorporating the audience suggestions- all within ninety minutes.

Entitled End with a Kiss, the fully-improvised tribute to Hallmark Movies made its debut at this year’s Hamilton Fringe Festival where it repeatedly sold out its shows, won over hearts of critics and audiences, and won several of the Festival’s top awards.

“Impromptu snowball fights, the career-obsessed Christmas hater, and the winning magic of the Christmas spirit (and love!)- we’ll have fun with all of the cliches.” promises producer Craig Logue. “The formula is like comfort food- it’s the same thing every time and it’s fun for us and the audience to create something special and unique at each show together.”

During the Fringe Festival, audiences would spin a wheel to determine a holiday, with the cast acting out Halloween, Arbour Day and more. For its upcoming run, the show will focus specifically on Christmas, with every performance being a light-hearted tribute to the most famous of Hallmark’s catalogue: the Christmas movie.

Red Brick Theatre, the company behind End With a Kiss, promises via a press release, that everything else will remain the same as the summer run, including the talented cast of improvising performers: Alan Belerique, Kristi Boulton, Aaron Boyd, Hannah Gallant, Phil Johnston and Jo Anne Tacorda.  Jacob Ollivier is the Music Director, who live-scores each show on the piano and will play plenty of Christmas tunes to help keep the audience in a festive mood.

As an improvised performance, there is no script, and no advanced knowledge of the city that the story could unfold in. The actors also have no knowledge of key events or how the plot will unfold- other than the popular formula that spurs over forty original TV-movies yearly.

End With a Kiss will return for 5 shows from December 1st to 4th at the Staircase Studio Theatre, 27 Dundurn Street North. Shows will run Thursday and Friday at 8:00 pm, Saturday at 2:00 pm and 8:00 pm, and Sunday at 2:00 pm. According to Logue, some shows in this December’s run are well on their way to being sold out, so those interested are encouraged to buy tickets soon to avoid disappointment.

Tickets are $20 and now on sale at redbricktheatre.com.

Editor’s Note: In keeping in line with our values, it is noted that the producer of End with a Kiss also manages elements of the Beyond James website. They were not involved in the publishing of this article.