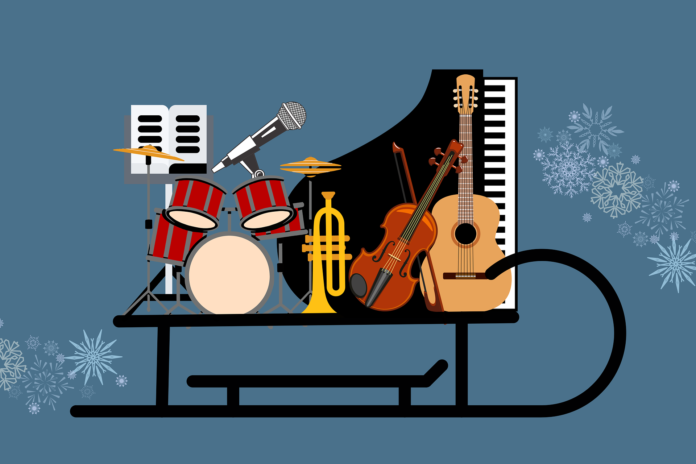 If you love the story of Scrooge, it can be fun to see different renditions of the famous Christmas tale, since so many theatre companies offer a version at this time of year.

Even if you haven’t read the original novella by Charles Dickens, the show has become a familiar tradition- making it a natural choice for Emerson Arts latest production, albeit one with an adaptation all its own.

“We knew we wanted to write something for Christmas and we wanted to make it funny.” says Emerson Arts Co-Founder Emily Bolyea. “The story of Scrooge is so classic that almost all sitcoms and television shows twist it to fit their audience. We thought, how can we make it different- a female Scrooge.”

Emerson Arts’ adaptation, a musical parody entitled Emiliza Scrooge follows the titular character, who has made millions dealing bitcoin. After her niece, Fran, accidentally destroys Emiliza’s white Tesla on her way to hand-deliver an invitation to Christmas dinner, Emiliza insists that she and her assistant, Lob Latchet, will work on Christmas day. While being visited by three ghosts and in an effort to heed their advice, Emiliza relives some core memories and must decide if she’s willing to change her selfish ways.

The show runs from December 16 to 18 at Evolve Theatre at Studio E on Fruitland Road in Stoney Creek.

To provide a musical element to the production, Emerson Arts has taken popular songs, including Blondie’s “One Way or Another” and Rick Astley’s “Never Gonna Give You Up” and rewritten the lyrics to fit the production. Each performer in the show will sing a solo or duet, notes Bolyea.

The cast of ten performers play fourteen different characters during the hour-long production. The first time the group came together for a read-through was a Zoom call in mid-November. Just over a month later, the ensemble has been meeting on a weekly basis to prepare for the show.

“We are so proud of every one of our awesome performers – big and little.” says Bolyea.

Emiliza Scrooge also marks Emerson Arts’ first partnership with There’s A Production; an independent entertainment company that focuses on Canadian material. While this is the first joint partnership between the two groups, the two groups initially worked together in Theatre Ancaster’s Frozen Junior.

In Emiliza Scrooge, There’s a Production’s Theresa Noon-Hunter once again directs, with the content provided by Emerson Arts.

If the heartwarming traditional holiday tale isn’t enough to deliver Christmas cheer, following each performance will be a Christmas Concert featuring the cast of Emiliza Scrooge.

Ultimately, “We hope audiences are doused with the Christmas spirit and walk away in joyful holiday bliss and a ticket in their funny bone.”