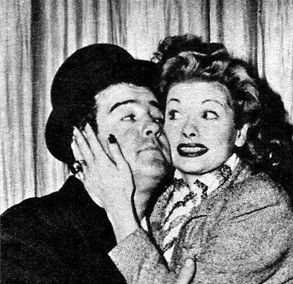 Charlie Chaplin once said ‘Life is a tragedy when seen in close up, but a comedy in longshot.’

The silent film star was losing popularity with the rise of radio, television and spoken word films; however, his words found truth in contemporaries Lou Costello (of Abbott and Costello) and Lucille Ball.

Those two iconic performers serve as inspiration for playwright and director Steven Elliott Jackson’s The Laughter, presented by Minmar Gaslight Productions and premiering at this year’s Hamilton Fringe Festival. Like much great art, the play was created after his original idea didn’t work out as planned.

Upon this realization, Jackson invited his past collaborators Brandon Knox and Kate McArthur for a virtual call to ask them what characters they may be interested in performing. Knox was intrigued by Costello; McArthur by Ball.

While Costello and Ball took different journeys to stardom, they had many opportunities to collaborate. The duo of Abbott and Costello began hosting a radio series in 1940, the same year they began to star in films. Around the same time, Ball was auditioning for roles like Scarlett O’Hara in Gone with the Wind, and supplementing her income and gaining exposure through radio. Their most popular collaboration is the 1945 film Abbott and Costello in Hollywood; but one of their first and lesser-known collaborations was a November 1943 radio show episode- a terrific coincidence and the jumping off point for The Laughter.

This timing is critical to The Laughter, which looks at a tragic incident that occurred shortly before Lucille Ball’s guest appearance. Based on a true story, Costello is determined that the show must go on when faced with a life-changing event. Abbott and Costello delivered a highly anticipated performance without anyone in the live audience being aware of the incident. At the very end of the show, Costello rushed offstage while partner Bud Abbott delivered heart-breaking news live over the entire network. That reality- away from the comedy on air- is a key theme in Jackson’s script.

“People have ideas of who they were, but what we really see are the characters they played. This is what I always kept in mind when I was writing.” said Jackson. “What the audience is seeing isn’t Abbott And Costello or I Love Lucy. These are two people who had lives that no one got to see behind the scenes and they were both facing some incredible adversity. When I brought the actors to do that first read, the line that stood was “how does one find laughter when nothing is going right in your world?”. We do find room for laughs and comedy, but there was a lot going on beneath the surface for both comedians.”

Recognizing that the actors- and the characters they played- were so adored by many, Jackson and team know they have a lot to live up to. However, Jackson is no stranger to historical productions, having produced hit Sarah/Frank in last year’s What the Fest?!; a radio play based on a true story in pre-civil war era New Brunswick. The research process was similar to that play, he says, involving biographies and an examination of their lives and situations that they were in during that time.

“I know there are certain expectations with names like these which can be daunting. People will want a full comedy and there are a number of laughs in this show, but it’s about something more.”

Through the process of research and reflection while writing The Laughter, Jackson found common threads to weave through the script, as well as relevance to the pandemic, tragedy and loss that many have faced over the past year- something he hopes will resonate with audiences who will be tuning in virtually.

“I think my hope is that we have given audiences a new way to look at these two people that connects in a lot of ways like the year we have just had with a pandemic and losses that hit in many ways, whether it was jobs, theatre, the closeness of friend and family or the losses of life that occurred.” Jackson reflects. “These two people in this play are just trying to survive in a time that has offered many challenges and great sadness and we know that they both went on to do more despite those challenges.”