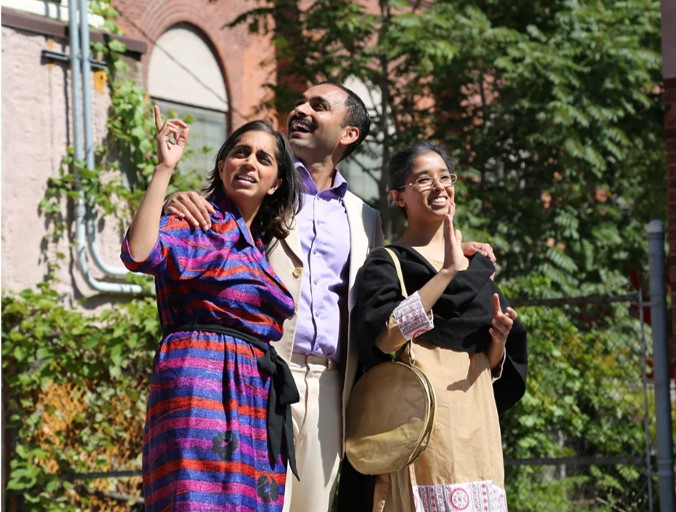 This year, the Hamilton-based theatre company is celebrating a decade of presenting stories from IBPOC (Indigenous, Black, People of Colour) artists. To mark the occasion, RBT has adapted four of its most popular plays into radio dramas, all from award-winning playwright Radha S. Menon. Audiences can listen to these epic and absurd tales about family, connection, and home wherever they get their podcasts this June 2022.

“Red Betty Theatre began as a vehicle to develop and share my voice with Hamilton’s eclectic audiences, which I did for many years with the support of community partners, the Hamilton Fringe Festival. During this time it became painstakingly clear that my experience wasn’t unique; countless other, talented and dedicated IBPOC playwrights face the same struggle trying to get work developed, produced and published,” says Menon.

“The Canada Council for the Arts’ Digital Now grant has supported the adaptation and production of five of my plays produced by RBT over the past ten years. Theatre is ephemeral; here today, gone tomorrow, like your favourite snack in the fridge. As podcasts, these plays have infinite potential and their reach is limitless; this is a true boon.”

The first play to be released, Rukmini’s Gold, holds a special place in Red Betty history. The play was the winner of the Critic’s Choice Award for the 2015 Hamilton Fringe Festival, and Winner of 2015 Toronto Fringe New Play Contest. Rukmini’s Gold follows the multi-generational saga of a South-Asian family’s travels from the industrial age to the present. The podcast is directed by Anand Rajaram, a frequent Second City collaborator and Dora-nominated actor for outstanding performance. Rajaram also provides the dramaturgy for the podcast, alongside Sasha Kovacs.

On June 13th, the next podcast will be released. Directed by Alison Wong, The Circus brings an absurd comedy about a woman’s search for answers about her past.

Nikki Shaffeelleuah, the past Artistic Director of The AMY Project, Editor-in-Chief of alt.theatre and Assistant Artistic Director of Jumblies Theatre directs the June 20th offering. In Ganga’s Ganja, a play set in the not-to-dystopian future, two sisters cope in whatever way they can to get by.

Red Betty’s final offering of the series will be released on June 27. Directed by Asha Vijaysingham, The Washing Machine is a family drama about class, religion, and the lengths someone will go to keep secrets.

In addition to a talented lineup directors, the podcast series features performances from some of the best performers in the industry, including Shelly Antony, Amanda Cordner, Sanskruti Maranth, Lisa Nasson, Ellora Patnaik and Anand Rajaram.