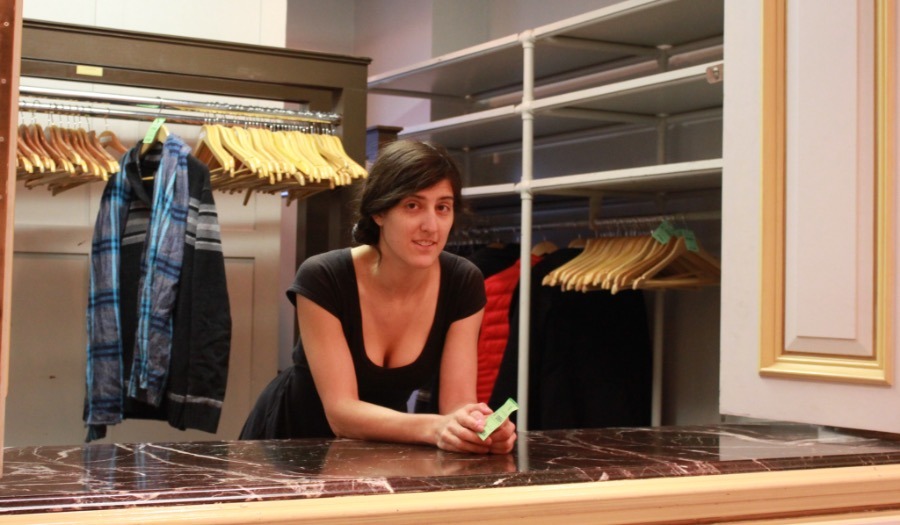 When visiting a nightclub, one is usually focused on the dance floor, or the drinks. The coatcheck, its small room and attendants are generally an afterthought. In Black Wool Jacket, this small room takes centre stage as writer and sole cast member Natalie Frijia shares anecdotes of incidents she witnessed and impactful memories from her time behind the counter at an unnamed downtown Toronto nightclub.

Black Wool Jacket is exceptionally well-written and structured. Main character (and writer) Nat excels at creating an intimate world and every detail, metaphor and story she shares with the audience is well-thought out and critical to the advancement of the plot. Nat does this so masterfully that it is difficult to see exactly how she has woven every element of the story together until the very end, when she ties up every loose end in a neat fashion and wishes the audience farewell. In particular, her ability to use and reuse the same analogy in new and unique ways ensures that the audience is with her- and rooting for her- through every step of her journey.

The pacing of the show is also, in general, very solid. There are a few moments where Nat seems overeager to continue with the story, and the audience catches up with the punchline of a joke after she has already moved on. However, Nat’s genuine enthusiasm for the story and topics she is sharing makes this easily forgivable.

Frijia has a strong natural stage presence that exudes cool confidence and even sipping a coffee cup seems purposeful. Nat’s gestures throughout the performance feel unplanned and natural, and usually served the purpose of enhancing the story- with one notable exception. Throughout the performance, Nat regularly reached to adjust her hair. Although this gesture was momentary in nature, it occurred numerous times- generally between stories. As the rest of Nat’s gestures were also natural-looking, this didn’t stand out or seem odd; however, it was distracting.

The stage for Black Wool Jacket is bare, with only a single chair, coat and coffee cup as Nat’s only props. This makes the lighting of the production essential to its success, as every alteration and change stands out more than it might otherwise. This element is also generally successful, although in the production I saw, there were a few moments where Nat was poorly lit or not lit at all. This may have been the result of a missed mark, or the capabilities of Mills Hardware, but was still disappointing and detracted from the momentum of the performance.

Overall, Black Wool Jacket is an incredible success. Through her writing, Nat constructs a romanticized world full of colourful creatures and characters that the audience is lucky to inhabit for an hour. Although this show could easily translate to a production with a larger cast, Nat’s masterful handling as ringmaster provides her with a full cast of characters in this one person show.