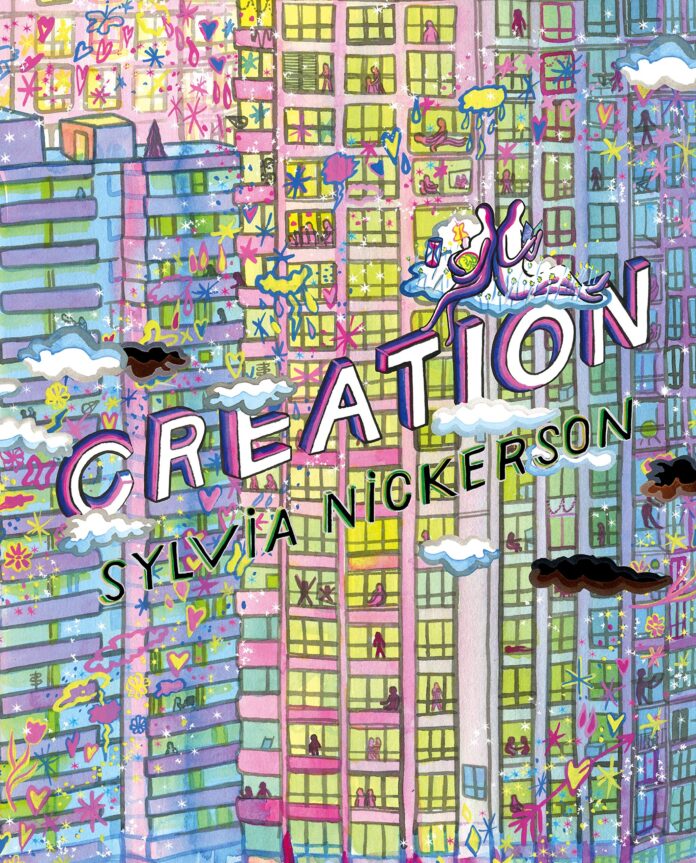 Hamilton has always felt like a city of contradictions; the disparity between what this city aspires to be versus what it used to be, is often at odds in the present. Since coming here over ten years ago, I’ve only encountered a handful of art works that have captured the spirit of this disparity. In Creation, visual artist and illustrator Sylvia Nickerson achieves this rare feat with a graphic novel that truly encapsulates the character of Hamilton.

Nickerson’s book says everything I’ve ever wanted to say about Hamilton but didn’t have the words. She renders humans like organic shapes of clay in a city populated by bizarre, expressionless beings. What’s more, in a bold choice, Nickerson places herself at the centre of her work; a struggling artist and mother without a face amid the novel’s unsettling cityscape of grey. If this seems like a stark picture, know that it’s anything but. Nickerson’s images are constantly in motion, interacting and corresponding on the page with an unexpected serenity.

We are introduced to Nickerson as a character as she wheels her infant son down a bustling James St. North during the now familiar monthly Art Crawl. The narrative establishes Nickerson as a recent expat from Toronto who, upon settling in Hamilton, is working to raise both her child and her profile as an artist. But Nickerson’s Creation is not content to strictly ponder the questions of displaced identity especially when it comes to the city’s recent cultural shift.

Underlying this familiar story, is something much darker and uglier. Punctuated by images of faceless figures screaming obscenities on darkened streets, Nickerson writes, “How could I ignore that this same place was where so many dreams had come to die?” For years, Hamilton’s self-styled motto was to be the best place to raise a child. But Nickerson quickly kills this saccharine statement by admitting, “the longer you live here, the more the current motto seems to be a joke.”

Creation swiftly moves into the recesses of loss for Nickerson. Her walks with her son become a journey into a deep recognition of the forgotten populace that hide in the cracks and crevices of our so-called Steel City.  In a particularly memorable scene, Nickerson spies a homeless figure lying motionless in the cavern of a dumpster. She calls a passerby. Is the person ok? A few wordless panels later: “He’s fine… just sleeping.”

In these vignettes, Nickerson flips the script on the cultural Renaissance so many of us have told ourselves about Hamilton over the last decade or so. A distorted tale of craft beer, lattes and art studios on James. In its place, Nickerson illustrates addiction, poverty and crime as an inescapable reality of Hamilton. In addition to herself, she follows the fate of a homeless woman named Nancy. From her days panhandling outside Nickerson’s house to frightening nights on the street to the public memorial after her death, Nancy gives a face to the faceless of Hamilton. It’s a moving tribute and searing indictment that stays with you long after you’ve set the graphic novel down.

But even as she touches on themes of hopelessness, Nickerson gives us cause for hope. Dreams, though dashed, are reimagined; and nowhere is this more powerfully expressed than in the final panels of the book. Creation is poignant and unsettling; the kind of work that draws you back to additional readings. In the tradition of many other graphic novels, it juxtaposes sparse words with evocative imagery to perfectly encapsulate the paradox of this city and the community of those who live here.