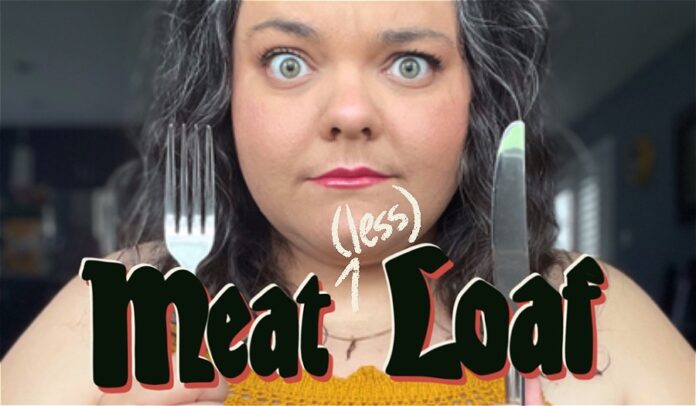 Walking into a theatre during a performance of Meat(less) Loaf might feel like walking into the set of a daytime cooking show- on the left hand side of the stage sits a shelf with various kitchen appliances, in the middle a large table with cooking utensils and baking products, and to the right sits a cardboard window painted with a bright blue sky and a tall birch tree.

Playwright and performer Carly Anna Billings chose an autobiographical approach to her story, monologuing about exploring her connection to her Italian heritage through cultural foods and family traditions as a vegetarian, to stumbling upon her Indigenous background, being assigned a status card, and unpacking the trauma of her ancestors.

When Billings approaches a stage, she owns it. Extremely charismatic and naturally funny, the playwright is a performer you feel connected to, even when divided by a crowd. Regularly breaking the fourth wall was a great artistic choice for the actress, as her magnetic personality draws in even those who were sitting in the back of the room.

For those of us who chose the back seats, however, we were often times leaning forwards and straining to hear what Billings was saying. Performing without a microphone, the actress does well when she projects her voice, but her softer deliveries were completely lost to mumbles and attempts at lip-reading.

What was not lost during Billings’ performance of Meat(less) Loaf, however, were the laughs. It was an absolute treat to watch the free-wheeling Billings shout, dance, and have a genuinely great time performing for us. If you’re looking for a good time, look no further.