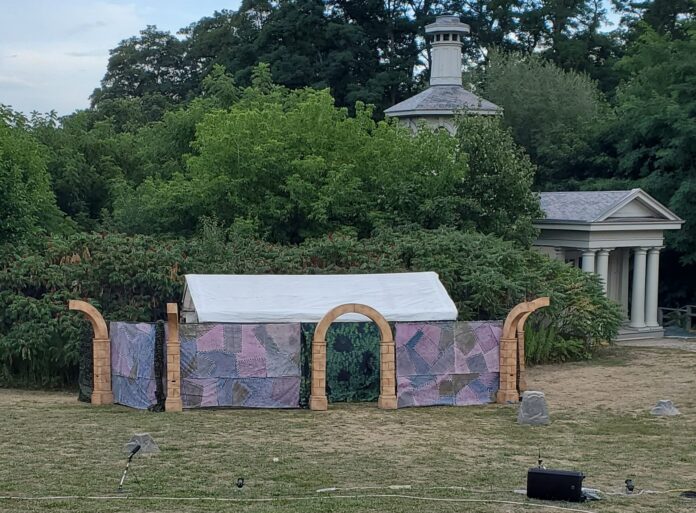 Summer outdoor Shakespeare performances are a longstanding tradition in numerous cities around the world. A Midsummer Night’s Dream, the Bard’s classic romantic comedy (and one of his most performed works) plays a particularly frequent and valuable role to these performances. As most of the action of Dream takes place in a magical world of fairyland, it’s ideally suited to be performed outdoors, while also lending itself to a wide variety of interpretations and personalization. For this reason, A Midsummer Night’s Dream feels like the perfect choice for Tottering Biped Theatre to establish itself at their new summer home at Dundurn Castle, after two dark summers.

Just prior to the show’s start, the audience is reminded of this by Associate Producer Alma Sarai. According to Sarai, this show is actually two years in the making. Tottering Biped had planned to move to Dundurn Castle and host their first performance in the summer of 2020. The company had even organized a successful fundraiser to help cover many of the costs to bring this popular tradition to Hamilton audiences. With approximately three weeks of performances planned, the company is clearly planning to make up for lost time and share their work with as many people as possible. The show is pay-what-you-can and is being offered in two separate locations: the grounds of Dundurn Castle and Ancaster’s Fieldcote Memorial Park and Museum.

A Midsummer Night’s Dream is one of a comedic romance, with multiple intersecting plots- including one that has four lovers scurrying through the woods ending up with the wrong person and in pursuit of the right person (and vice versa)- and another that features a play within the play. Given the plot, the large cast (Tottering Biped’s version credits thirteen), and the careful choreography that the company is known for, one would expect a high-energy production. But the energy of the cast never meets the expectation that the script and direction seem to call for. This is just one way that the world created in this Dream isn’t dreamy at all- it’s a world that’s gone a little askew in a lot of ways.

Perhaps it’s because the performance will have two separate settings that the physical props and scenes are kept relatively minimal. The show relies on the costumes to add colour and character to the setting, but never provide a strong sense of place or time. Paired with modern asides, choreographed dancing and some klezmer music, it creates a weird mishmash of styles that never seem to make sense.

It could also be more technical- performers aren’t individually mic’d, so the area mics don’t pick up everything that is being said and are prone to weather interference. Or it could be that the production length- particularly the first half- is too long to feel like a magical dream. Shakespeare’s script is typically performed at just over two-and-a-half hours long. Tottering Biped’s version, without many cuts to the script and plenty of additions for movement and stage direction (as often occurs in outdoor performances), runs close to the two-and-a-half hour mark (including intermission)- way beyond the realm of an accessible, casual production.

Whatever it is, nothing unifies the choices made by Director Trevor Copp or connects everything together, making the performance feel at times like disjointed vignettes. But after two years away, it’s still a relief- and delight- to see Tottering Biped returning with an eager cast and energy to share their work with audiences. Hamilton deserves a tradition of outdoor summer theatre, and Tottering Biped seems ready to fill that need, and there were some outstanding moments and concepts in their rendition.

It’s commonplace for Shakespeare’s various works to be twisted, broken down and remoulded into something new for audiences. Tottering Biped’s version is no exception. Central character Lysander has become Lysandra, a female character in love with Hermia. Performer Natasha Ramondino brings finesse to this role, embracing its femininity while staying true to stereotypical elements of the character’s traditional male roots. Other modern twists involve a singalong to Harry Belafonte’s Day-O, Three Stooges references, and a little pseudo audience participation. But Shakespeare purists needn’t fret- the classic language mainly remains intact, albeit with a few modern asides thrown in. The language is particularly powerful in Kendelle Parks’ Oberon (another gender swap), where the menacing monologues practically echo through the trees.

Despite its flaws, as the sun went down and fireflies and stars came into view above and the cast performed Shakespeare’s timeless script, it felt magical to be transported to this sometimes dreamy world- as if the past two years were just part of a slumber.