Fringe Review: MINE! True Stories and Legends of the Porcupine Gold Rush 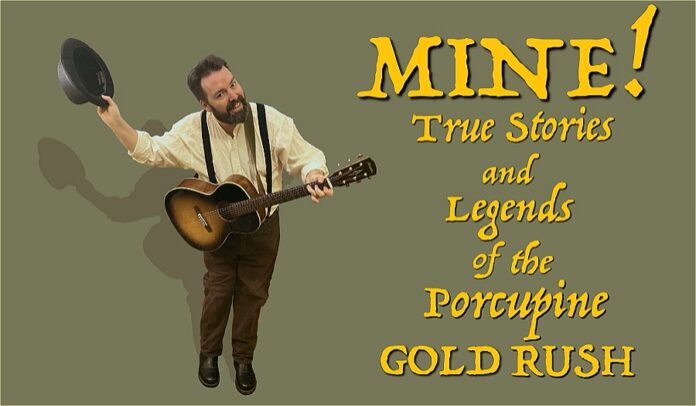 Who: Chasing Shadows Productions
What: MINE! True Stories and Legends of the Porcupine Gold Rush
Length: 60 minutes
Where: Westdale Cinema (1014 King Street West)
When: July 21-31 as part of the Hamilton Fringe Festival
Tickets: $12 + $1.75 fee at https://boxoffice.hftco.ca/event/866:574/

When we think of the gold rush, often, the imagery involves travelling west to California, or north- to Klondike, Yukon. MINE! True Stories and Legends of the Porcupine Gold Rush take the story a little closer to home- specifically, to Porcupine, Ontario.

The true story of the town, prospectors and notable events is primarily told through original music, composed and performed by Will Gillespie. Each topic is given a distinct style of music- a testament to Gillespie’s versatility. When not singing, playing the guitar, kazoo or harmonica, Gillespie is offering narration and context to his songs, while accompanying images appear on a screen next to him. Despite this setup, the performance never feels like a lecture- the show’s pacing keeps the focus on the music, with the stories told through song. Gillespie doesn’t name himself, or give depth to his persona until the end of the show- it’s tough to know during the performance if he’s meant to be a character from the time period, or if he’s just a history buff.

This type of production requires a tremendous amount of research Chasing Shadows Productions has done it- and it shows. Images are accurate depictions, each one individually marked and labelled for source material. As Gillespie speaks or sings, stage manager Susan Robinson moves through an extensive number of images, provided to both entertain and educate. Her timing is meticulous. In both pictures and songs, there is a tremendous amount of information shared. This becomes difficult to absorb, particularly during sections of music when lyrics become rushed and difficult to comprehend- some self-editing would go a long way to creating catchier and more understandable songs.

The unspoken star of the performance are the “sets”- original paintings projected on to the Westdale’s large movie screen, serving as both a background for songs and imagery. Painted by Robinson for this production, they not only provide a much-needed visual focal point to Gillespie’s performance, but are also genuinely beautiful works of art. Combined with the music, this is Chasing Shadows’ most successful work in recent history.

MINE! was devised as an educational and entertainment production to travel across Ontario to share more of the province’s history by Chasing Shadows Productions. Due to its content, MINE! would be right at home in any historical theatre or museum- which is exactly where it will go following its premiere at the Hamilton Fringe Festival.