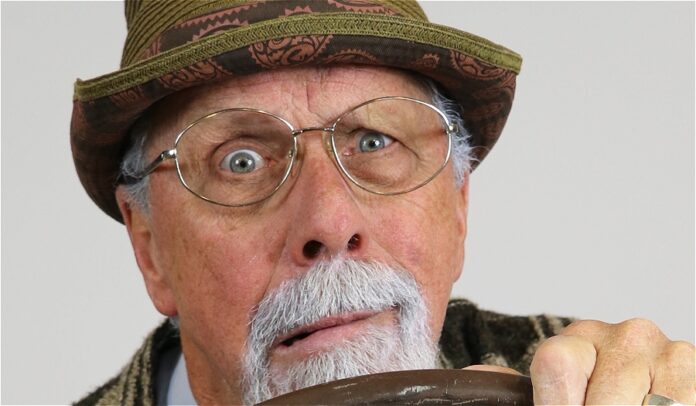 Meet Old Tom, a senior citizen who makes sure to tell you he is not a “geefer”, not a “gaffer”, and is certainly not a “coot”, but an “old fart”- a self-deprecating term that Tom has adopted as an attempt to push back against ageism, something he encourages all of us to think deeper about in “Old Fart”: a sixty minute production by playwright Tim Bourgard.

This “Tom” is the amalgamation of seniors that actor and writer Bourgard has met throughout his career. Tom’s displayed goofiness, experiences, and ukulele-playing are a mixture of different larger-than-life seniors, mashing together in Bourgard’s performance of the man dressed rather sharply in a cap, cane and bow-tie.

Bourgard’s character embraces everything there is to getting older; speaking on the affectionately named “senior moments” when your memory slips, to struggling to keep up with technology, to the oh-so-sweet senior discounts at local restaurants. On occasion, these stories turned sour when slipping into stereotyping, however intentional or not. An example is when a fictitious scam caller is said to have an “Indian” accent, and describing a teen who is up-to-no-good as “wearing all black, having purple hair and a lot of tattoos.”

Some “speed” may have helped keep the audience’s attention, as I found myself drifting by the end of the show when stories started to drag. Although that may be a testament to Bourgard’s life-like performance, as for those of us with elderly loved ones, we know their stories tend to bend up, around, and sometimes backwards.

Wholesome for the most part, Tim Bourgard’s “Old Fart” speaks to the large and ever-growing population of seniors who feel unheard, unwanted and invisible. Old Tom asks his audience-goers to make room for those sixty-five and above to speak, be heard, and crack some jokes.