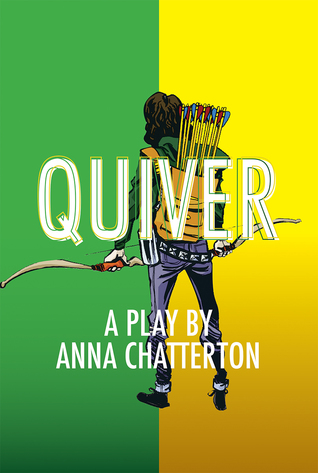 One could argue that reading plays is a rare art form, and one that’s not done enough. It’s true that published plays aren’t promoted enough or in the same way at retail book sellers. That’s a shame because reading a play offers rewards that are different yet no less rich than attending said play in a darkened theatre. Playreading offers the reader a unique opportunity to simply hear the words and the voice of the playwright and imagine what the story might look like independent of a production onstage.

Anna Chatterton’s charming yet affecting Quiver reads almost like a personal diary from the perspective of three very different women. Although the play largely follows the journey of teenage Maddie as she finds herself amid the turbulence of her family, both single mother Sheila and older sister Bea play integral parts to the story. As the reader, we are immediately thrown into the chaos of Maddie’s household when Sheila breaks up with her boyfriend Daniel only to see him hook up with Bea. Long since divorced from Maddie and Bea’s father, Sheila falls into a depression and hides away with another boyfriend while Bea moves in with Daniel.

Maddie, on her own in the apartment, decides to remake herself. She takes a job at Suzy Shier at the local mall while nurturing dreams of joining the army. Key to Maddie’s aspirations is Arrowette, a young superhero from the DC comics pantheon who uses athletics and arrows to fight crime. Arrowette lives in Maddie’s vivid imagination while serving as a touchstone, helping her through the neglect and turbulence of her home and high school life. As the story develops, Maddie’s isolated life comes into conflict with that of her sister and her mother in a series of encounters fraught with awkwardness and trauma.

The action of the play is highlighted by several memorable scenes, most notably Maddie’s hilarious confrontation with a bully and a high school party that harkens back to almost every John Hughes movie. But the power of Chatterton’s writing is revealed in the lengthy monologues that dominate the script. In these sections, the confessions, selfishness and insecurities of each of the characters are laid bare. And it’s absolutely beautiful to read. The writing is raw and unrefined in some places; deeply sad and profound in others. Wrapped up in the self-centred desires of Maddie, Sheila and Bea is an unmistakable yearning to connect; with a purpose, with someone else, and with themselves.

Chatterton has written Quiver as a one-woman show and, as with many such plays, there’s a heavy dose of autobiography. She makes note of how elements of her own childhood and adolescence, including her own employment at Suzy Shier, informed the voices of Sheila, Bea and Maddie. I had the fortune of first seeing this play as a live presentation when it debuted at Theatre Aquarius wherein Chatterton used a vocal processor to synthesize her voice as all three characters. Though I heard echoes of this performance when reading the play, it was by no means a requirement for enjoying the story. Indeed, it could be argued that approaching the play without having seen the show allows the reader to imagine the scenes for themselves; overlapping their own anxieties and insecurities with those of the characters.

Quiver was nominated for a Hamilton Literary Award (2019) and is one of the few plays to have earned such an accolade. As a playwright, myself, I’ve always been a fierce advocate for the importance of publishing plays and encouraging readers to purchase them as they would any other piece of writing. Given the strength of Chatterton’s writing, and the distinctive quality of her characters, Quiver is a remarkable entry in the canon of published Canadian plays.