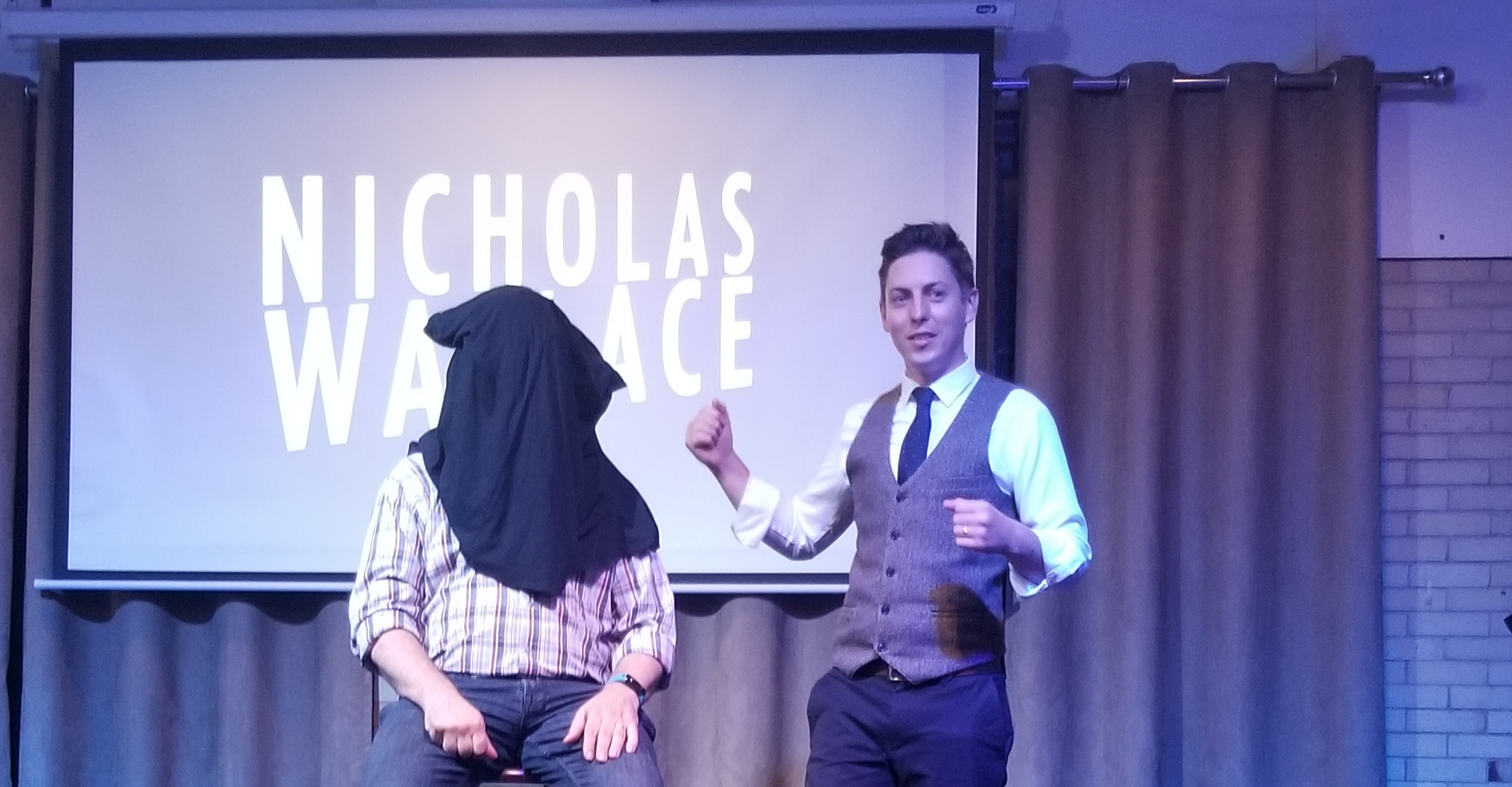 The Surprise Show offers audiences a chance to see how an artist creates their work. The artists featured in the show are past the conception stage of their project and created an initial piece of work; however, before sharing with a wider audience, are looking for feedback to make their art more successful. This concept can be terrifying for both audience and performer; audiences have no sense of what they will be witnessing (or in what form), and for artists, there is a unique vulnerability that occurs when performing their work for the first (and potentially last) time.

Nicholas Wallace ably led the audience through this experience in a well-paced hour long show. There was no programme handed out for the evening; instead, the audience was led from act to act by Wallace, who proved himself as entertaining a host as he was a magician. As performer and host, Wallace executed his magic while alternating his time on stage with artists who were also workshopping their performances. For his own efforts, two of the three illusions that Wallace performed during the show were his first time attempting them in front of an audience. Although this showed through in his delivery at times, Wallace’s techniques and professionalism were flawless and the audience was repeatedly left stunned and awestruck at his abilities. At the start of the show, Wallace informed the audience that his goal was to make them believe in the impossible, and his abilities as an illusionist made this guarantee easy to fulfill each time he was onstage.

Artists featured in the first evening included Luke Brown; who gave a sampling of his audio project, which showcases notably weird moments in history. For his offering, Brown gave a brief history of James Dean’s car and questioned whether the car was cursed. The concept of the project is fantastic and reminiscent of the early “Stuff You Missed in History Class” podcasts. While the script and audio cues need further development, Brown’s enthusiasm for the project is apparent and it will be interesting to see how this project develops.

Also featured was comedian Ryan Sim. Much of Sim’s materials was Hamilton-focused and not all of it resonated well with the audience. However, the purpose of The Surprise Show was to allow artists to workshop material and comedy is already an extremely subjective art form. The final component of the evening was a short film co-created by Wallace and his son (Noah), in which the younger Wallace wrote and read a story that was animated by the older Wallace. Although only ninety-seconds in length, the film was not what one would traditionally expect from a young child, making it a highlight of the evening (see why by watching it here).

In The Surprise Show, no promises are made about what will be seen, except that the works being showcased are in progress. It is made clear that some elements of each performer’s act will be successful, while others will not be. For the audience, the fun is in the journey. And with an able host and entertainer in Wallace, the journey is a delightful adventure that would be worth attending every week of the series.