Fringe Review: A Time of Future Tales has Potential to be a new Classic 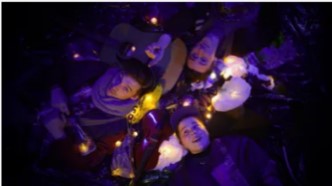 Who: My Friends and I Theatre
What: A Time of Future Tales
Where: Players’ Guild of Hamilton (80 Queen Street South)
When: July 18-28, various dates & times (as part of the Hamilton Fringe Festival)
Tickets: http://hamiltonfringe.ca/shows/time-of-future-tales/

Canadian musicals are gaining popularity on an international stage, thanks to efforts like Broadway-success Come from Away, Britta Johnson’s Life After and Soulpepper’s recent hit, Rose. It is a welcome gesture to see artists like A Time of Future Tales’ Eudes La Roche-Francoeur follow suit and present such a unique concept with well-written music and a cast that radiates talent. The production is clearly a work-in-progress, but it is entirely possible to imagine that this work could continue to be workshopped and eventually launched on a professional level in the manner of Fringe successes Two Pianos Four Hands or Kim’s Convenience.

Taking place over the course of a one-night celebration in a post-apocalyptic commune, A Time of Future Tales‘ greatest strength is its ensemble. The production is a challenging feat for any performer, as it requires each individual to be a strong actor, instrumentalist and singer, able to perform both in an ensemble and shine as an individual. Each cast member rises to this task effortlessly with an extraordinary amount of talent; there are no weak links in this group.

The direction of A Time of Future Tales attempts a naturalistic style to mixed success. The fourth wall with the audience is removed within the first lines of the show, and the blocking frequently sees performers with their backs to the audience. The latter is less successful, as the performers are not mic’d, and without this, it was difficult to hear them when not facing the audience. Similarly, without characters being mic’d, individual singers were drowned out during potentially emotional moments where a soft voice combined with a loud instrument.

A Time of Future Tales attempts to be a story about stories; which stories we remember and pass on, which we forget and why. Although the story emerges in bits and pieces, it is never fully flushed out. It utilizes ten characters to explore this concept, each with a unique and often interlinking storyline. For an hour-long production, this number of characters is overwhelming. Despite distinct costumes, it is difficult to keep each individual clear, and relationships are never fully explained. Although efforts are made in the script to ensure each character has a moment to shine, the overall story suffers as a result, with elements of the plot left undeveloped and the narrative feeling a little chaotic. The production would benefit from focusing in on a smaller number of storylines to fill out the main emotional arc of the show and drive the plot forward.

One of the most wonderful things about Fringe Festivals is the ability to workshop pieces and watch works in progress. To my knowledge, this is the first public iteration of A Time of Future Tales and the first musical by Eudes La Roche-Francoeur. This show and its actors have incredible potential to become a breakout hit, and based on tonight’s performance, I’m very much looking forward to seeing how this show develops in future iterations.