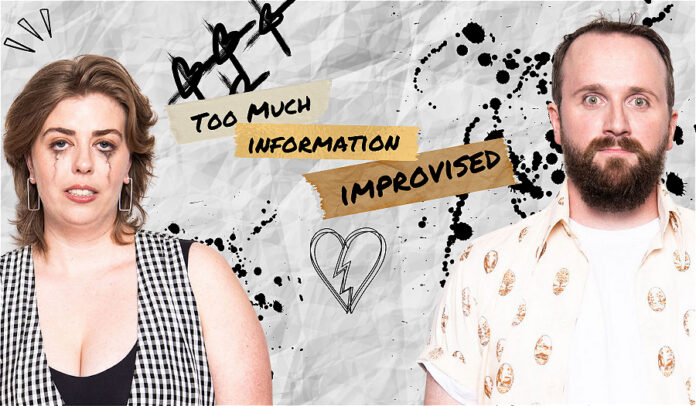 Who: Dog Martin Comedy
What: Too Much Information, Improvised
Length: 50 minutes
Where: Staircase Theatre Bright Room (27 Dundurn Street North)
When: July 21-31 as part of the Hamilton Fringe Festival
Tickets: $12 + $1.75 fee at https://boxoffice.hftco.ca/event/866:615/

What would you say to a former partner, if you had the chance? For Steph Haller & Paddy MacDonald, they aren’t only given this opportunity during TMII: Too Much Information, Improvised, but they get to relive it for the entertainment of an audience night after night.

The former flames turned improv-duo revisit their unsuccessful relationship through improv, with audience suggestions and their own memories to guide the comedy. The premise is unique and intriguing- as is Haller and MacDonald’s comfort with each other and vulnerability with the audience. It seems that no topic- from taste in music to penis size- is off the table.

This show has received rave reviews from both Hamilton audience members and critics across Ontario alike, and when my fellow-reviewer’s had a change of plans, I was eager to fill in and attend the show. However, most of TMII just didn’t work. The duo’s interactions with the small audience were hilarious, but when it came time for each of them to share their individual perspectives, it felt like they were short on material or under-prepared. Several improv scenes fizzled out, or went on well past the punchline, and an failed impression of Back To The Future’s Doc Brown left one of the duo confused. A special shoutout to their audio tech, who provided several laughs in otherwise stagnant moments.

Improv comedy is notoriously difficult. It requires one to think quickly on their feet, have a well-matched partner and be naturally funny. Even with all of this, it’s still possible to have an off-night due to audiences, energy or just the stars not aligning. While it’s clear to me that Haller and MacDonald both possess the traits needed for success, it just wasn’t present during the show I attended.