Fringe Review: Too Big For Her Britches 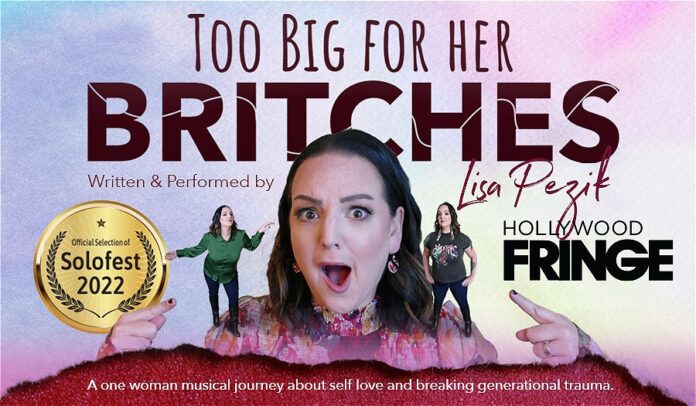 Lisa Pezik personally bills herself (among other things) as a self-talk, story expert, author and speaker. In Too Big for Her Britches, her one-woman show about the power of self-shame, the influences of those around us, and finding our inner warrior, Pezik brings onstage all of these offstage qualities to great success.

Don’t be fooled- despite the themes and Pezik’s work as a professional speaker, the show isn’t a PSA. Instead, it’s the multi-year journey told through a series of vignettes of main character Luna; who struggles to conform, gain approval and love from her mother, and ultimately comes to love and accept herself. Pezik is a convincing actress and sells the concept- and herself- successfully, playing a range of characters from a high-school boyfriend to her inner shame with only a change of voice and mannerisms. Staging elements are well-produced; lighting, sound effects and the use of a screen at the back of the stage all play an important role in the transformation of Pezik’s many characters. The vignettes which detail pivotal moments in Luna’s development are interspersed with original music, also performed by Pezik, and serving as her inner monologue.

While unique to the production, and Pezik is a capable singer, as a storytelling element, the original music doesn’t add much to the production. By the time Pezik sings her message, the theme has already been conveyed. However, if the original music of Too Big for Her Britches is instead considered the main event- almost like a live album release- with the vignettes as detailed liner notes, then the acting elements become integral to the heartfelt music, providing additional context and history to how each song developed.

Pezik clearly knows how to deliver success, and Too Big For Her Britches is no exception. She tells a story with a relatable story in a fearless and heartwarming way that serves as an ode to every girl and woman who has struggled to fit in or felt external pressure to be someone different. Ultimately, in finding love for herself, she gives an important reminder as only a motivational speaker can, that in letting go of pain, we can find love in ourselves.