Book Review: Sally Cooper’s With My Back to the World 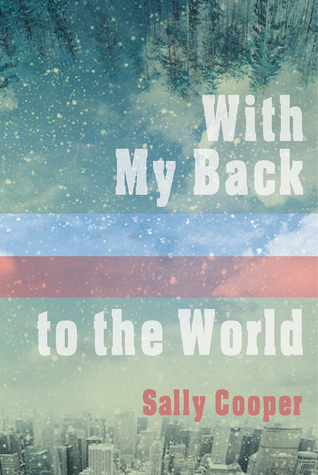 Title: With My Back to the World
Author: Sally Cooper
Publisher: Wolsak & Wynn
Publication Date: 2019

Part of the magic of any story with multiple characters and points of view is taking the journey with said characters and discerning the strange and unexpected ways they are connected. Sally Cooper’s newest novel, With My Back To the World, is a powerful novel that retains such magic with remarkable ease. Telling the story of three women, separated by a distinctive gap in time and place, Cooper moves the reader back and forth over the course of a single eventful day. All three characters are linked to one another but scarcely can understand the nature nor the implications of this connection. Indeed, the importance of their bond is almost entirely up to the reader to discern and consider by the end of the novel.

The first character is Rudie, a Hamilton-based documentary filmmaker struggling to prepare her home and her life for the arrival of her adopted daughter Roselore, a young refugee escaping a disaster in Haiti. Rudie’s day takes her from Jackson Square to her home near James North and later to the airport. Matters are complicated by two prominent men in her life: her father Bob and her ex-lover Dylan. Both men pull at Rudie’s resolve as she works to settle the day in time to make her flight to meet Roselore; Bob questions her intent to adopt a child from Haiti while Dylan plants the seeds of doubt regarding her artistic integrity and her fidelity to her marriage. With her husband away on a shoot, the tension in these particular scenes moves the story along at a quick clip.

Cooper then shifts the novel’s focus in time and place to that of the New Mexico home of artist Agnes Martin. A historic artist of repute, Agnes has escaped her life in New York to reconnect with her craft in the desert. But her seclusion is broken by the arrival of Marsha, the wife of Agnes’ former lover, along with a young boy named Lenny. Their arrival, and the crisis that follows, profoundly affects Agnes and forces her to change the course of her life dramatically. The parallels between Agnes’ story and Rudie are intriguing. Both women are artists, and both are confronted by the issue of motherhood. What’s more, Rudie’s current project in the novel is a documentary feature on Agnes’ life and career. These connections allow Cooper to build compelling parallels between the two women.

The focus shifts again to the third character, and takes readers further back in time. We are introduced to Ellen, a Black homesteader in northern Ontario during the late 1800s, who is preparing her dead husband for burial. Facing an uncertain future as a racialized widow in colonial Ontario, Ellen must soon contend with the legacy left by her husband and his suspicious dealings with local businessman Darius Horn. But all is not as it seems regarding Ellen and her husband, as revealed by her affection for young Philip Macleod, the son of the local reverend. With the death of her husband, and the threats leveled by Darius, Ellen’s story feels the most fraught of all of Cooper’s narratives and, like the other stories, effectively moves the reader from one chapter to the next.

The sense of place in Cooper’s novel is perhaps its strongest quality, and this is especially the case with Rudie’s storyline in contemporary Hamilton. I could immediately picture her drive through downtown, up the escarpment and out to the airport. This lent an immediacy to the novel that kept me turning the pages. But even in the Agnes and Ellen chapters, Cooper elegantly captures how the place where a person lives is critical to shaping who they believe themselves to be and where they hope to go in the future.

Of equal importance to place in the novel is the question of family. Who do we accept as our family and how do we acknowledge that our acceptance will irrevocably change our identity as much as our lives? Cooper’s novel tackles these questions by drawing an ephemeral connection between Rudie, Agnes and Emma that is only clear in the final pages of the book.

With My Back to the World is an epic piece of storytelling that paradoxically feels intimate. We are always sitting on the shoulders of these three women as they navigate and negotiate their way through a world that seems constantly out to test them. The uniformity of these tests–with their shared focus on issues of motherhood, race and family–is a credit to Cooper’s strength as a writer and the way in which the three distinct storylines are interconnected.

New Contemporary Opera Premieres in Hamilton For One Night Only