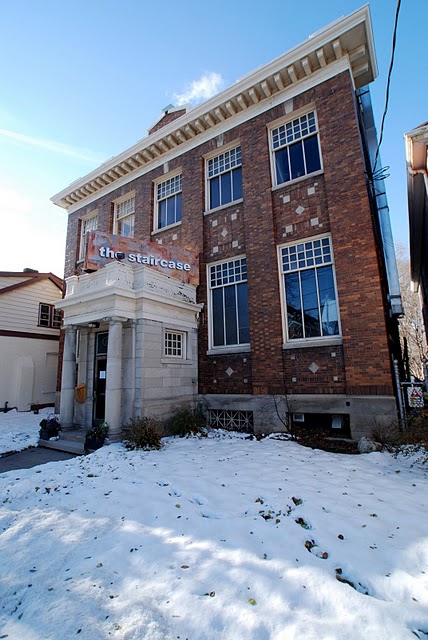 If the pandemic wasn’t enough, the last few months have been difficult ones for Hamilton venues. In late 2019, Artword Artbar closed its doors. The Pearl Company followed suit with a definitive date for its sale and closure, and just last weekend, music bar This Ain’t Hollywood went silent- although the latter two are hopeful that the buildings may continue as performing venues. Now, west-end arts incubator The Staircase Cafe and Theatre is closing its doors as well.

The Staircase unofficially opened in 1997 and has been a cultural incubator ever since. We closed our doors mid-March 2020 to protect our community and our loved ones. When theatres are allowed to reopen, our intimate theatre will be limited to approximately 15 audience members. The Staircase survived entirely on ticket sales, concession sales and rentals, and these reduced numbers are not compatible with survival. The pandemic will eventually pass, vaccinations will appear, and life will return to a new normal. We are closed and expect to remain closed after the pandemic.

Change was underway for The Staircase before the pandemic began; however, as longtime owners Hugh MacLeod and Kathy Garneau quietly began looking earlier this year for new owners to take over the building, which houses two theatre spaces, a performance and rehearsal space, as well as a basement multi-purpose room and cafe. In May, the venue began offering some of their signature dishes for takeout customers.

As a for-profit venue, The Staircase cannot access the type of government support that other arts incubators or organizations depend on as part of their financial plan, and as an independent venue that relies on bookings with minimal staff, cannot access some of the government supports currently in place due to COVID-19. As a result of physical distancing requirements as part of the province of Ontario’s Stage Three Reopening Plan, The Staircase could reopen as a venue, but would be limited to a maximum of fifteen patrons. This small number would make it difficult, if not impossible for a show that has rented the venue- let alone the venue itself- to break even on ticket sales alone.

With the closure of The Staircase, and knowledge that the space is for sale, rumours are already circulating that a condo or loft development will replace the theatre space, located just north of Dundurn and King Streets.

The announcement has left several Hamilton events and troupes homeless. In addition to the many comedy troupes that were based at The Staircase, the annual HamilTEN Festival and community training group Curtain Call Performing Arts used the theatre as their performance home. The three performance spaces were also heavily utilized during the Hamilton Fringe Festival, where 15% of the performances in the 2019 Festival took place at the venue.

Despite its closure, the Staircase’s legacy will live on. Touted as the home of improv comedy in Hamilton, The Staircase Improv community, which is housed at the theatre, will continue to offer classes. Currently, the group is offering online activities; but is planning to begin in-person courses again when they deem it safe to do so. Current Staircase Theatre owner Hugh MacLeod remains the Executive Director of Staircase Improv.

Unless The Staircase is bought and reopened as a performing arts venue, the closure of the building contributes to the growing void of Hamilton’s arts community. Small and mid-sized theatre spaces are needed to incubate troupes and collectives- it’s rare that a brand new company is able to fill over 500 seats a night. Instead, organizations like The Staircase offer artists and organizations the chance to nurture risky work and reach a wider audience through affordable ticket prices. A lack of spaces forces artists to move their work into the streets, found spaces- or even online. However, it does not benefit a neighbourhood or a city by creating a physical space for a community. A venue like The Staircase creates a hub- a place where people can come to. And currently in Hamilton, the arts community is experiencing a major void in its community and its artistic infrastructure due to these continuing closures.